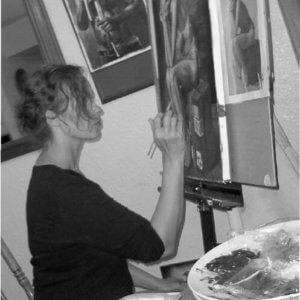 Currently my work falls into two categories. The first is beauty for the sake of beauty. I am focusing on increasing my technical ability while painting or sculpting the images that I find appealing. The subjects I portray reflect my values of being a thinker, being a hardworker, being self-reliant, and most of all, being happy. My goal is to show what humanity can and should be. The outward strength and beauty of my models is a reflection of their inward characteristics. They are confident, ambitious, and understand the value of their lives. Because of these qualities, I am occasionally surprised to find that my creations have become my heroes.
The second category tends to still focus on beauty, but I want my viewers to think more deeply about the ideas that I am presenting. These pieces have the lure of mystery. When creating these works, I usually have an idea, or a question, or even a song bouncing around in my head that I need to create and actually see in the physical world. My goal is not to frighten my viewer, but instead to encourage them to entertain new ideas or to challenge old concepts that maybe they thought they had figured out. I do not think that a person should ever stop learning about themself or the world around them.
I find a welcome challenge in portraying the human form accurately and beautifully. I enjoy my process as much as my finished works. It is my highest aspiration to create work that will continually evolve.

The Portrait Society of America (since May 2014)